Provisional data on Ghana’s 2021 Population and Housing Census (PHC) has been released by the Ghana Statistical Office.

The Ghana Statistical Service, the institution mandated to collect and disseminate statistical information on Wednesday, September 22, 2021, put out the results of the 2021 census which began in June this year.

Per the information, Ghana’s current population stands at 30.8 million.

Aside from this total population figure, other takeaways showed that 50.7 % of the population now are females, with the remaining 49.3 % being males.

1.  The 2021 PHC puts Ghana’s population figure at 30.8 million. The population has increased by 6.1 million from the 24.7 million recorded in 2010.  This is however a 2.1% growth rate, but the slowest since independence. With this, Ghana’s population is expected to double within 33 years, with an estimated population of over 50 million by 2050.

8. Ghana’s population has grown almost fivefold since the first post-independence.

9. Ghana’s population is growing, but at a declining rate compared to previous censuses.

10. The 2021 PHC is Ghana’s first fully digital census, as it employed technology in all aspects of its implementation. 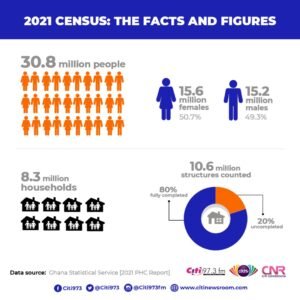 The first modern population census in Ghana was conducted by the British Administration in 1891.

After that, censuses were conducted at ten-yearly intervals except in 1941, when World War II interrupted the series.

The next census was conducted in 1948, after the War.

The Ghana 2021 PHC provides updated demographic, social and economic data to support national development activities and for tracking the implementation of national, continental and global goals, including the Coordinated Programme of Economic and Social Development Policies, 2017-2024; An Agenda for Jobs: Creating Prosperity and Equality of Opportunity For All; Agenda 2063, The Africa We Want; and Transforming Our World:

The 2030 Agenda for Sustainable Development.

This information will help central and local governments plan for various educational, health, housing, and other social services for different groups of persons, including the vulnerable. 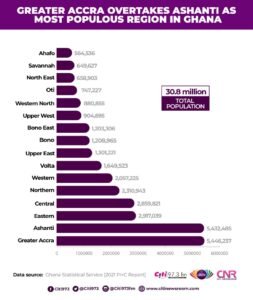 Information from the Census will also help guide individual-level decision-making and the private sector, including businesses, plan their activities, which will benefit the economic development of this country.

In addition, international organizations, including Development Partners (DPs) and Non-Governmental Organisations (NGOs), will use the 2021 PHC data to support Ghana’s development activities.

The legal authority for conducting the 2021 PHC was the Statistical Service Act, 2019 (Act 1003), which stipulates that “(1) The Service shall conduct a census of population every 10 years in the month of March.