Conflicts and violence have characterised the New Patriotic Party (NPP)’s polling station executives election in the Yendi Constituency after some irate youth vandalised the Party’s office on Sunday, March 13.

This comes after the Party’s leadership issued a warning that it will expel members who do not use internal mechanisms to address their concerns.

The youth claim the Member of Parliament (MP) for the area, Farouk Aliu Mahama, is trying to stuff the election register in order to get his favorite persons elected.

The party supporters who destroyed sign boards of the MP explained that the register being used for the exercise has unapproved names and individuals captured in it.

They swore to resist any attempts by their leadership to impose their will on the electorates and the party faithful, adding that they have already lost confidence in the leaders.

“What we realised from the so-called register is that they have put family and friends, husbands and wives and people who do not vote in the various polling stations that they put them as execuitves. We in Yendi cannot be bought by anybody,” they said. 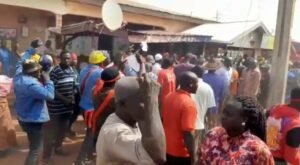 Meanwhile, the youth wing in the Tano North Constituency of the Ahafo Region says they will resist attempts by the MP, Freda Akosua Prempeh, to reverse the election results.

They allege that the MP, on a media tour in Ahafo said she does not recognise the outcome of the elections that elected polling station executives in the constituency, in an exercise chaired by the Municipal Chief Executive (MCE), Osei Boahen.

At a press conference at Tanoso, spokesperson for the youth, Gloria Kwartemaa Amponsah, said, “in their capacity as members of the party who followed the process from its beginning to the end, the official polling station elections have been held in the Tano North Constituency, and competent executives have been elected.”

“We cannot, and do not want to engage in media banter with our MP, but we want to state categorically that all that she wants the whole world to hear and sympathise with her are false and a figment of her imagination.”

“We are not preaching or prophesying doom or calamity to befall the party in Tano North, but if the national body follows the lies being spread around by our MP and take any unpopular decision based on that, then the NEC would have themselves to blame in the aftermath of what happens in the Constituency.”

Conflicts have rocked some electoral areas as the governing NPP begins reorganising processes ahead of the 2024 general elections.

Although the election of polling station executives comes off soon, some party members have accused their executives of hoarding the forms.

The February incidents include, Kwadaso in the Ashanti Region, where some NPP members locked up the constituency chairman on Saturday.

Similar agitations transpired in the Akuapem South Municipality of the Eastern Region and Ningo-Prampram in the Greater Accra Region.

Manhyia North and Ho Central constituencies have registered some debacles as well.Currently, some party members in New Juaben North and Sunyani Easthave petitioned the court to seek an injunction of their respective polling station elections.