Viral videos captured the popular preacher in the company of others at what is believed to be the residence of fetish priestess turned evangelist, Nana Agradaa.

The preacher in one of the videos approaches the camera and explains the reason for the visit.

Meanwhile, the Police have since issued a statement on the viral videos and how an attempt to arrest the preacher resulted in an attack on the police officers. 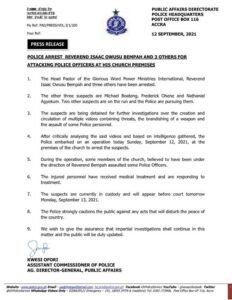 ‘To do what?’ – Road contractors reply government’s return-to-site order

Political parties in Ghana are worthless so I don’t vote during elections – E.L fumes

If you think laws don’t work in Ghana, wait until you commit an offense – Kwaw Kese warns