President Akufo-Addo has extended the leave of absence from office, for the Gender Minister, Sarah Adwoa Safo.

The Dome Kwabenya MP’s leave, which she sought for personal reasons, was supposed to have ended on August 31, 2021.

However, she was unable to resume and requested extension. 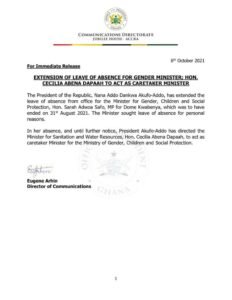 Communications Director at the Presidency, Eugene Arhin in a statement on Wednesday said Adwoa Safo’s leave has been extended.

It did not, however, state when she will resume.

“In her absence, and until further notice, President Akufo-Addo has directed the Minister for Sanitation and Water Resources, Cecilia Abena Dapaah, to act as caretaker Minister,” the statement said.

Meanwhile, the Minister’s videos on her TikTok account praising God and giving thanks for His grace has been trending.

‘I’m not for any presidential aspirant, I’ll back whoever NPP elects’ – Nana Addo

Political parties in Ghana are worthless so I don’t vote during elections – E.L fumes

If you think laws don’t work in Ghana, wait until you commit an offense – Kwaw Kese warns