The ‘Koene’ hitmaker, made this suggestion on his social media handle when he revealed that he recorded two songs with Castro a fortnight before his disappearance in 2014. 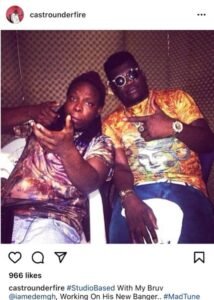 Reminiscing his fond memories of Castro who has been declared dead after seven years of his weird missing at the Ada Estuary, Edem shared Castro’s 2014 Instagram post with both of them in the recording studio.

Section 33 of Ghana’s Evidence Act states that if a person has not been heard of for seven years despite diligent effort to find that person, he will be presumed dead.