Legacy Life Entertainment signed artiste, Gregory Bortey Newman who goes by the stage name King Promise has produced one of the most streamed albums in the history of Ghanaian music.

The historic album titled ‘As Promised’ which was released about two years ago, according to King Promise and his management has garnered over 100Million streams across all platforms.

Announcing this great achievement by King Promise on Facebook, record label boss for emPawa Africa, Mr. Eazi congratulated his close friend and thanked them for having trust in their workable partnership.

“Big ❤️ to my Bro King Promise & the entire Legacy LIFE Entertainment Family!!! Thanks for trusting us at emPawa Africa #History #AfricanExcellence”. 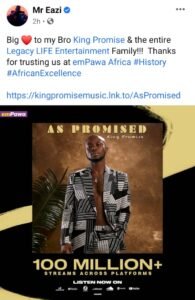 Recently, banking entity Ecobank Ghana signed King Promise as a brand ambassador for their enormous services due to his soaring reputation in the music industry and the world over.