This is the first time the MP will avail himself for court processes in Accra after his bodyguard allegedly assaulted a court bailiff, a claim he has denied. 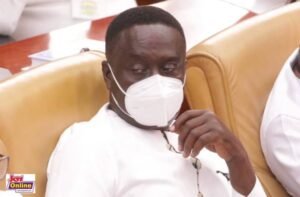 It also follows several weeks back and forth as court bailiffs say they have tried unsuccessfully to serve the MP.

Speaking in an interview with JoyNews on Monday, the NDC National Chairman, Samuel Ofosu Ampofo, revealed the party’s leaders will be in court to solidarise with him.“The MP will subject himself to the laws of the land, he will appear before court and all of us will go with him tomorrow [today] because we believe the MP is innocent and would not be intimidated by the harassment that is going on.”

“We need to create an environment that will create dialogue and consensus building rather than the intimidatory approach,” he said.

Mr Gyakye Quayson is facing charges of perjury and forgery. He is also alleged to have had a dual citizenship at the time of filing his nominations to become a Member of Parliament.

The New Patriotic Party (NPP) has been in court to, among other things, seek an order to restrain the lawmaker from performing parliamentary duties.A Legal and Constitutional Committee Member of the NPP, Gary Nimako Marfo, has said that all charges levelled against the Assin North MP will be fully pursued to their legitimate conclusions.

In an interview on Newsfileon Saturday, February 12, Gary Nimako said the party will employ all available judicial processes to stop the MP from attending Parliament’s business as soon as possible.

Meanwhile, the Minority Caucus in Parliament has accused government of seeking to gain undue advantage in Parliament, by deliberately going after the Assin North legislator.

It has also dismissed claims the MP is deliberately evading court processes.